Welcome to HazteK Software, the home of many freeware applications including StorURL, TrueIP, SMTP Mail Sender and many more. Feel free to browse around, and if you see anything that interests you, go ahead and give it a try. Everything on this site is free to use for personal use. If you have any questions, please feel free to get in contact via the Contact page linked at the top of the site. Thank you for visiting, I hope you have a wonderful day!

Are you or someone you know considering ordering solar panels, a solar roof, or maybe an electric car from Tesla? If so, consider using my referral link. By ordering through this link, you will be helping keep the software on this website free. Just a single referral will basically cover the entire cost of running this website for a year. This is by no means an attempt to sell you something you don't want. If you are already in the market though, and don't have another referral link already available, you can use mine and help support freeware on the web! The best part is that this isn't a one-way deal, you will also receive an incentive to use the link. Depending on what you order, you can either get a cash bonus (solar) or free super charging (vehicles).

Thanks for visiting my site and your consideration! 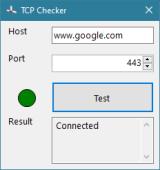 I recently needed to test whether a TCP connection could be made between a monitoring server and one of the servers it is monitoring. Because of limited visibility into IP routing and firewall rules, I was unable to verify what was causing the connection issue it was having. The monitoring server didn't have a telnet client installed on it, so I was unable to quickly use that to verify whether a socket connection was possible. Since I didn't have admin rights to install the client, I whipped up this little portable tool called TCP Checker. It let me figure out very quickly whether it was a transport layer issue or an application layer issue. I cleaned it up a bit, and added some prettiness to it, and now it's available for you to download as well. If you ever need to quickly determine if your firewall admin is blocking you from doing something, this tool can help you diagnose. :)
New Application: Color Picker

When developing websites or applications, sometimes you want to match colors or even just figure out what color is being used. There are many tools out on the market, both for pay and for free that will let you select any color on the screen and display its properties. Color Picker is one of those tools. It doesn't do anything any better than the others out there, but it is very, very simple. It only does one thing, and hopefully does it well.

If you are interested in using such a tool, and you aren't one for excessive functionality, give it a look and see if it will work for you. If you aren't in the market for something like this, thanks for visiting, maybe something else around here might be of interest to you. Any way you slice it, I hope you have a great day.
New Widget: Old Clock

I recently was required to "upgrade" from Windows 7 to Windows 10 when I got a new computer at work. For the most part, Windows 10 is not too bad, but there are a few annoyances that come along with it. One of them, for me, is the new calendar when you click on the taskbar clock. I don't like the way the calendar scrolls one week at a time. In Windows 7, the calendar scrolled one month at a time when using the mouse wheel, which is much more preferable.

So after searching the web and trying various registry hacks that no longer work with the latest builds of Windows, I decided to fix the problem myself. After a few hours of hacking away at Win32 API stuff, I have come up with Old Clock! Yeah, real original name, I know. But the gist of it is that it's an old clock for your new version of Windows. Nothing fancy, minimal resources, the way I like my widgets.

If you are interested in this new tool, feel free to check it out on the application page. If you have any suggestions or comments, feel free to contact me and let me know!
Website revamp
I've decided to revamp the HazteK Software website to make it a bit slimmer. I've noticed that the old Wordpress site has been dog slow lately, and I felt like I could increase its speed a bit by narrowing it down to just the things the site needs.

If you find anything wrong or broken on the site now that it has been switched over to the new one, please let me know via the Contact page. Any bug reports will be greatly appreciated.
500,000 Downloads!
Woohoo! As of earlier this week, more than 500,000 downloads of various free applications have occurred. Thanks to all of those who have tried and enjoyed using my applications. I'm glad that you have found something of mine useful enough to spend the time and resources to download and try it out. HazteK Software has been around since 2002, and the applications available on the site have come a long way. These stats are only from data going back to 2017, so technically there probably way more downloads than this, but I will celebrate 500k. Thank you again to all of those who have joined me on this journey, see you when we hit 1 million!

Here are a few number highlights:
TrueIP sending an excessive amount of emails?
Recently I have been receiving a lot of support requests stating that TrueIP is sending excessive emails or flip-flopping because the service is down. I've done a bit of digging, and it seems like the problem is tied to the http://myip.dnsomatic.com URL that is supplied by default with TrueIP. Some people are having issues with that service. I am not sure if they are being blocked or rate limited due to excessive checking, or if there is a real problem with the service. It is a 3rd party service that I have no control over. The solution for now seems to be to just switch to a different external IP address provider.

Recently it has come to my attention that the updater tool that is released with a few different HazteK Software applications, including StorURL, has been having problems trying to check for and download updates. This seems to stem from the fact that the .NET 2.0 framework that it is built on does not support the latest version of TLS, but my hosting provider requires it for HTTPS queries. Unfortunately, this means the updater will be unable to update itself, since it is currently checking the HTTPS URL for the updates website. Since you will not be able to update automatically, you will need to download the latest version of your favorite applications to get the new updater. You can also just grab the latest updater executable directly and replace the one you current have on your system.

If you have any questions, please feel free to ask in the comments section or get in contact with me directly.
New Application: Registry Key Diff

I use PuTTY a lot. I manage a lot of servers for my work, and I have a separate session for each one. I recently ran into a problem where a significant number of my sessions were rendering weird characters compared to some of the others. After troubleshooting for a while, I finally found information that said PuTTY was possibly the culprit. Since I had some sessions working, but others were acting strange, I started poking through the settings trying to figure out what was different in PuTTY.

After banging my head for a bit, I decided there had to be a better way. I did some searches, and I couldn't find anything on the internet that would do exactly what I wanted to do, which was compare two registry keys to see what values were different. I could eyeball it, of course, but why not let the computer do the hard work for me? Since I couldn't find a pre-packaged solution on the web that specifically worked with registry data, I decided to write my own. Introducing Registry Key Diff. It's a very simple tool that allows you to compare two keys to see what might be causing your problems. For me, it ended up being a character encoding issue, but some of my sessions were configured properly, while others were not. I used the new tool I wrote to copy the encoding setting to all of the other sessions, and everything is happy now.

Anyway, I figured I'd clean up the application and share it with everyone. Who knows who might be out there needing to do something similar to what I wanted to do. If you're interested, head on over to the application page to download it and check it out.

I was searching the web today, and I realized that my browser had stored thousands of previous search queries in its database. I'm one for privacy, so I felt like I should clear those out. If anything, cleaning them out should help to keep the system running smoothly. I went into my Firefox settings to find the way to clean them out, and I realized that there was no easy way to do so. The search history is tied together with the form history, so if you clear out your searches, it will also clear out any saved data you may have to auto-populate forms. That doesn't make sense to me, so I searched for a way to fix that. I asked on the Mozilla support forums, and got the standard response: use an extension. Well, the extensions that do this are convoluted and actually do a lot more than I needed. I just wanted to clear my history without doing it manually by holding the delete key down for 20 minutes. I started poking around in my profile directory to see where this information might be stored and found the location. It is saved in the same database file as the forms data, which makes sense as to why they are tied together in the application. Fortunately every entry for the search history has a specific field name, and makes it easy to manually clear just that, and nothing else. Now, I could have just used sqlite3 to wipe out the data, and be done with it, but I wanted an easy way to do this again in the future.

Firefox Search History Cleaner is born! It's a tool that does exactly what I want, and nothing else. To use it, all you need to do is launch the executable and click the Load Database button. It will find your profile automatically (if you have more than one, you will have to choose) and load your search history. You can sort it by search query or date, and select specific entries to delete or delete them all. Everything is driven with a few simple buttons. Before you delete your history, you can export your search history to a text file for later reference. If you're a Firefox user, and you hate that you can't clear your search history, then check out this tool and see if it's right for you!